Link UP! The Research

Link UP! The Science

Polymers are large molecules consisting of many ‘repeating units’ of smaller molecules joined together.

Imagine a set of beads on a string:

Polymers can display lots of useful properties, and are used for a variety of different applications:

Where do polymers come from?

Many polymers are found in nature.

Starch is a polymer of glucose, a type of sugar, which is used for energy storage in plants.DNA is a polymer of nucleic acids. The sequence of monomer units stores information within cells.

DNA is a polymer of nucleic acids. The sequence of monomer units stores information within cells. 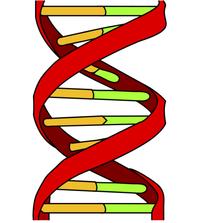 The information stored in DNA is used to code for the construction of another type of biological polymer: proteins.

Proteins are polymers of amino acids. The sequence of amino acids in proteins enables them to fold into complex 3D shapes, and fulfil many important biological functions:

Haemoglobin, for example, is used to transport oxygen around the body. 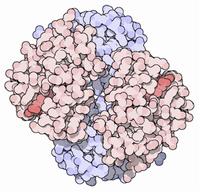 Antibodies are proteins that protect us from disease. 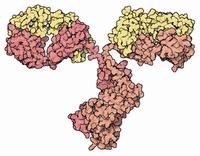 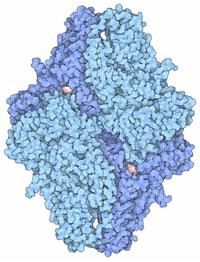 As chemists, we can design and make polymers. At the moment, we are not as good as natural systems in making polymers with defined sequences, but we are making progress towards that goal!

Many of the polymers that we make fulfil important functions. When designing polymers, we can choose the features we would like the polymer to display.

From chains to networks

The chain of a polymer can be flexible, allowing it to curl around and adopt different shapes. For example, polymers in solution often resemble a random coil.

Sometimes, chains can interact with each other, forming crosslinked networks:

Crosslinking can drastically change the properties of a polymer, often leading to the formation of a film or gel. 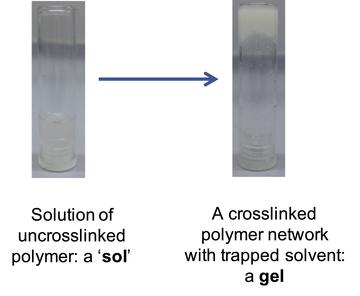 Alginates are polymers of sugars that are produced by some species of algae, and some bacteria.

Alginates can form gels in the presence if ions like Ca2+, which form crosslinks between the negatively charged groups on the sugar.

For some bacteria, alginates are a major structural component of biofilms. Biofilms are complex communities of bacteria bound within a network of polymers inlcuding polysaccharides and DNA. The polymer network presents a physical barrier to the delivery of drugs to the site of an infection, making the infection difficult to treat. Biofilms are associated with persistent infections and contribute to the growing problem of antibiotic resistance, where bacteria are no longer affected by the drugs that we rely on to control infections.

A biofilm formed by Pseudomonas aeruginosa: 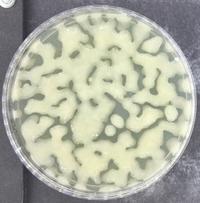 Challenge: make your own alginate gel!

Polymers can have many uses in healthcare. For example, polymer gels are used in dressings for burns and other wounds. Wound dressings create a sealed environment around the injury, preventing it getting infected, and promote healing by keeping the environment moist.

Poly(vinyl alcohol) (PVA) is commonly used to make wound dressings, because it can form a crosslinked gel which is biologically inert.

PVA is also used to make glues. The chemical structure of PVA is:

The crosslinks in PVA gels can be formed by the addition of the borate ion [B(OH)4]-. The borate ion can form weak bonds between the OH groups on the polymer chains:

The resulting gels can be loaded with other chemicals that help the healing process, like antibacterial drugs.

In some cases, like a wound dressing, we would like a drug to be released over a sustained period. In other cases we would like the drug to be transported to its site of action, then released all at once, in response to a trigger from the surroundings.

What polymers do you see in the world around you?

Have you come across any other gels?

Monomer: a molecule that forms the basic repeating unit of a polymer.

Gel: a 3D network of molecules within a liquid

Crosslinking: the process of joining two or more polymer chains together

Drug delivery system: a strategy that increases the proportion of a drug that reaches the intended site of action.

Remember that if you have any questions about anything you have read on the research page, you can ask us at one of our live online events!

Connect with our Outreach Programme