Light UP! The Research

Research at the University of Warwick

Protecting ourselves and the world

Light is everywhere! It is the reason why we see. Moreover, it has vital roles in sustaining life – we cannot live without it! Light presents itself as a form of energy that, at the same time, behaves like a particle and like a wave. The easiest way to explain light is if we first think of it as a wave: it travels in waves and in straight lines. The light that we see (visible light) is actually only a small part of all the energy surrounding us which includes energy waves that our eyes cannot detect. The energy waves, that we either can or cannot see, are also known as electromagnetic waves because they have both an electric and a magnetic field. Combining all these waves together, from smaller ones to larger ones, we form the electromagnetic spectrum. All these energy waves have many uses, from technology and science, to medicine and everyday life as seen in the examples given in the diagram below. 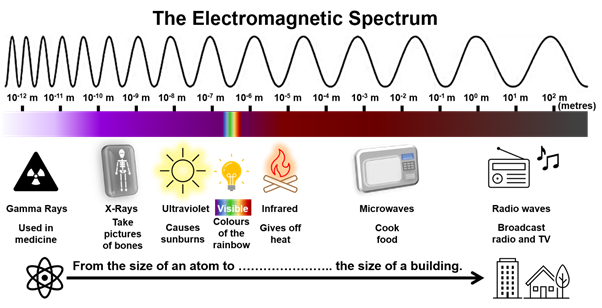 In the electromagnetic spectrum, frequency and wavelength are inversely proportional, this means that as one value increases, the other will decrease. Thus, longer wavelengths such as radio waves have lower frequency, whereas shorter Gamma rays have higher frequency. 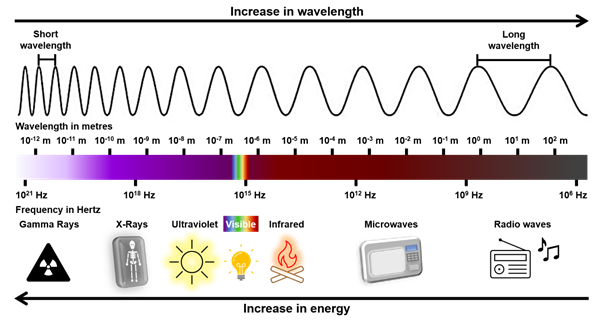 In the diagrams above, the light that we see, more exactly the visible region in the spectrum, includes all the colours of the rainbow. The colour of light depends on how short or long its wavelength is. For example, violet light has the shortest wavelength in the visible region and red light has the longest wavelength. All the other colours of the rainbow, indigo, blue, green, yellow and orange, have wavelengths between violet and red. This means that visible light contains shorter, medium and longer wavelengths.

In addition to light behaving as a wave, scientists have suggested that light also exists as tiny particles known as photons. Photons are the basic unit which make up all light and they are also the smallest amount of electromagnetic energy. They are always moving and when travelling in vacuum, they have a constant speed of 2.998 x 108 m/s, which is also known as the speed of light.

Light is the only kind of energy that we can see. It made up of many different colours; all the colours of the rainbow! There are three primary colours (red, green and blue), which can be combined to make lots of different colours, as demonstrated in the image below: 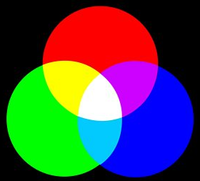 Light travels in waves from a source to the observer in straight lines, so light must be emitted by an object, or reflect (bounce) off an object for us to be able to see it.

Objects appear coloured based upon the light that they can reflect, the rest is absorbed. For example, a red object, such as an apple, can reflect red light, but all the other colours are absorbed. In the picture below, only the grey light is reflected off the surface of the mouse.

There are two types of reflection, called diffuse reflection and specular reflection. 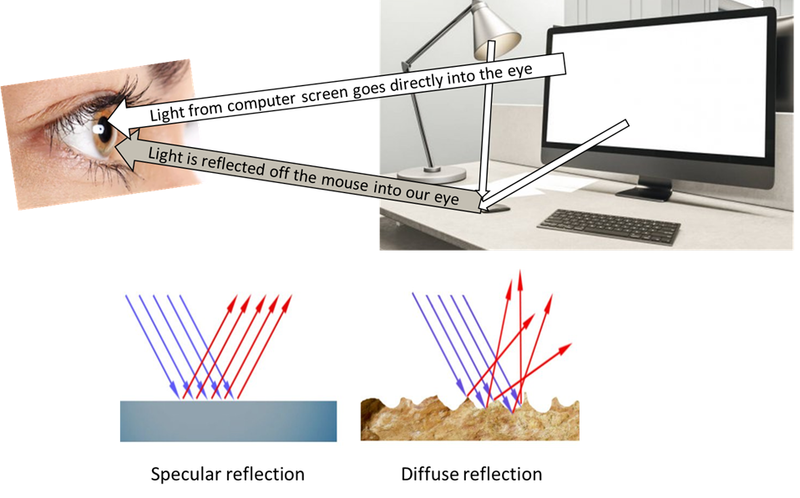 The colour of light that we see depends on the frequency (and in turn wavelength) of the wave entering our eyes. The colour red has the lowest frequency, and the frequency increases as we go through the colours of the rainbow, with violet having the highest frequency. We cannot see other regions of the electromagnetic spectrum as the cells in our eyes cannot detect them. Because each colour has a different wavelength, they behave slightly differently when they pass through an object. This means the colours can be dispersed (separated out) using a glass prism.

We must try to avoid getting sunburn when we go out on a sunny day, because to get sunburnt is our body’s way of telling us that we have been exposed to too much harmful ultraviolet radiation from the Sun. Over time, your skin can get damaged due to this radiation and eventually skin cancer can develop. Sunscreens are an important form of protection, alongside precautions such as staying in the shade and avoiding going outside between 11 am and 3 pm, when the sun is at its highest in the sky.

Although we cannot see the ultraviolet radiation from the Sun directly with our eyes, the long-term effects that it has on the skin can be seen in this image of a lorry driver.  Ultraviolet radiation is not absorbed by glass and can therefore pass through it. As a result, the side of his face that has been next to the window of his lorry for 30 years is visibly more wrinkly than the other, which has been shaded. 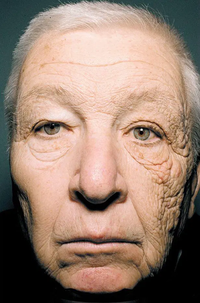 The role of a sunscreen is to form a protective barrier between the sun’s rays and your skin. It offers protection in several ways.  Some ingredients in the sunscreen that you apply absorb the sun’s rays, others can reflect the radiation away from your skin.

Our research explores new ways of making this barrier more effective, by investigating the effect of the Sun’s rays on the ingredients within a sunscreen. We study how these ingredients behave when they interact with light, this is called “photochemistry”. The rays from the sun cause an energy transfer to the absorbers in the sunscreen that can cause chemical effects. We can study these effects using a technique called spectroscopy. Spectroscopy allows us to measure the effect that light has upon materials.

Laser light is different to the light we get from the Sun or from a light bulb. If you have a lightbulb in the middle of the room and you walk around it, you will be able to see it no matter which side you look at it from, because it emits light in all directions. 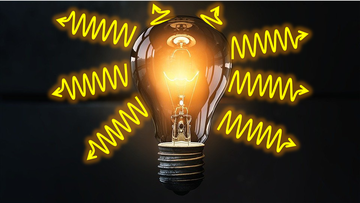 But laser light is different: it only points in one direction and you cannot see it unless something is in the way of the laser beam spreading the light.

For example, how can spies see the security lasers when they are breaking into secret rooms?!  They can only seem them if there is enough smoke or dust in the air to spread the laser light! That’s why they spray some smoke on the lasers before attempting to slither their way through the maze!

Travelling in only one direction is one of the special characteristics of laser light, but lasers are also special because the light that comes out of them is very powerful. In extreme cases, lasers can burn paper and cut through glass and other materials! These powerful laser beams are created by sending normal light into special crystals which turn the light coming in into more powerful light coming out - the crystal amplifies the light. Laser light can be used for many things, including making "movies" of what happens to molecules when light hits them!

Wait, what? How can that be done?

In addition to being very powerful, laser light can also be ‘flashed’ really quickly. It is almost as if it is being turned on and off really fast, but so fast that you cannot even notice it.

Scientists use these fast-flashing laser beams to study how molecules move. The idea is similar to a technique used to make animated films such as Shaun the Sheep or Missing Link, called ‘stop motion’. The illusion of movement can be created by putting together many still pictures at each step of the motion and then playing them together very fast one after the other, like with a flip book:

So, if we were to take a picture of a flower from the exact same place every day for a month, we could make a film of it growing, a bit like this:

In the same way, we can take ‘pictures’ of molecules moving to then put them all together and understand better how they move.

But molecules move very very fast, within around 0.000000000000001 seconds! So, we need the very fast flashing light of the lasers to take the pictures and make these molecular movies.

This technique is called ultrafast laser spectroscopy and is one of the tools that scientists use to see what the molecules inside sunscreens do when they absorb sunlight. When we apply sunscreen on our skin and go out in the Sun, what do the molecules do? Do they dance? Do they break apart? Do they stay still? These are the questions we can answer with lasers!

Some of the ingredients we find in sunscreens today have negative impacts on humans and the environment. For example, they have been linked to coral bleaching which leaves the coral susceptible to disease and possible death. As a result, several countries have put a ban on these ingredients meaning that we need to study new ingredients that could be safer for the environment. 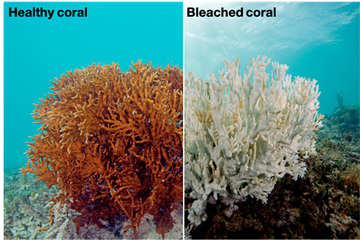 Taking inspiration from Nature provides a solution to this problem and is an avenue our research is exploring. As many plants and microorganisms have existed long before humans, they have adapted very well to protect themselves from the sun’s rays by making their own sunscreen.

We can either directly extract Nature’s sunscreens for our own use or we can make molecules that look similar. Both approaches will hopefully result in sunscreen ingredients that are safer for the environment as they already exist in Nature. 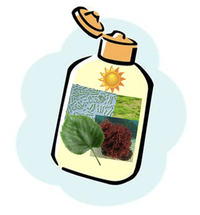 All of the following websites have more information about the science discussed here!

Why do we need to avoid using sunscreens that are bleaching corals in our seas?

Anyone who has watched Blue Planet or Our Planet documentaries will have learnt from the legend that is Sir David Attenborough that the bleaching of corals reefs in our seas is having a dentrimental effect to a huge number of extraordinarily important natural processes which make life possible on our planet.

Do some reading, and if you haven't watched Blue Planet or Our Planet, then do! Learn more about what is happening to our coral reefs and what we can do to help it recover. Of course, sunscreens aren't the only substances bleaching the coral reefs, what else is causing this bleaching?

You might find these definitions helpful when reading the Research Page.

Remember that if you have any questions about anything you have read on the Research Page, you can ask us at one of our Live Online Events!

The resources for Light UP! have been created by a team in the Department of Chemistry at the University of Warwick.

For more information about Outreach at the University of Warwick, please click here